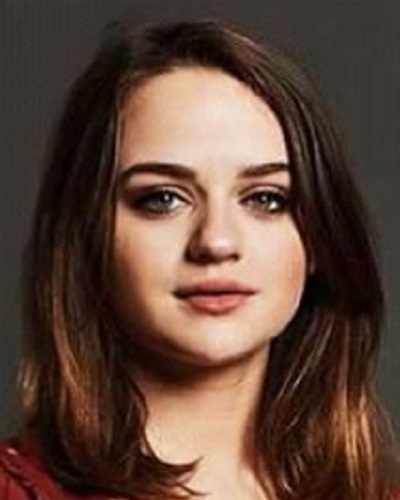 Joey King Biography and Filmography, Personal Information, and Others

Joey King biography and filmography must be sought by her devoted fans. This American actress is truly talented and beautiful. If you are one of her fans, you need to know everything about her. Here, there will be detailed information about Joey King's biography, including King's date of birth, King's Instagram account, and her current romantic partner.


The Information about Joey King Biography and Filmography

In fact, Joey King's full name is Joey Lynn King. She was born in Los Angeles, California on 30th July 1999. She is 19 years old today. Joey's nationality is American and her zodiac sign is Leo. Joey is 5 feet 4 inches (1.63 meters) and weighed about 118 lbs (54 kg). She is a brunette or brown-colored on the hair. Then, she has the eye color of bright blue.

King's is the youngest daughter in her family. She has two older sisters: Hunter King and Kelli King. Both of them are actresses as well. Her father, Terry King, is a former professional arm-wrestler. The information about her mother is unknown. The family lives in Los Angeles, California. Moreover, has been in the film industry since the age of 8 prevented Joey from attending regular school. For your information, her formal education has been done in private, which means that she is homeschooled.

So far, King has been acting in more than 30 movies. Her debut movie is 2007 “Reign Over Me”, where she acted opposite Adam Sandler. She rose into stardom when she played in highly-anticipated 2011 movie “Crazy, Stupid, Love” along with Ryan Gosling and Steve Carell. Here are some of her selected filmography and TV appearances: Reign Over Me (2007) as Gina Fineman, Horton Hears a Who! (2008) as Katie, Ice Age: Dawn of the Dinosaurs (2009) as Beaver girl, Battle: Los Angeles (2011) as Kirsten, Crazy, Stupid, Love (2011) as Molly Weaver, The Dark Knight Rises (2011) as Young Talia al Ghul, Oz the Great and Powerful (2013) as China Girl, and The Conjuring (2013) as Christine Perron.

In addition, she also played in Independence Day: Resurgence (2016) as Samantha "Sam" Blackwell, Going in Style (2017) as Brooklyn, The Kissing Booth (2018) as Elle Evans, and Slender Man (2018) as Wren. From TV Appearance, there is The Suite Life of Zack & Cody, Malcolm in the Middle, CSI: Crime Scene Investigation, Fargo, Tween Fest, and The Flash.

For a personal relationship, she has been in a relationship with fellow actor Jacob Elordi since 2017. Before that, she was dating Dylan Sprayberry. The relationship ended in 2016. For your information, she is quite active on Instagram. Her official Instagram account is @joeyking. She has 8.7 million followers on Instagram so far. If you are hard fans of her, just follow her account now and get her updates every day.


Well, those are everything you need to know about Joey King. By understanding Joey King biography and filmography, you can find her in the movies easier, and just find out her personal details as well. (gk)