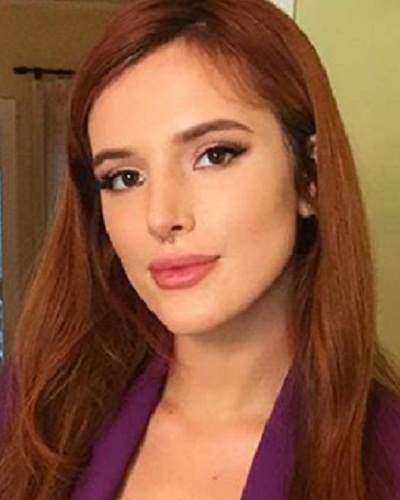 If you are interested in watching Disney Channel shows, you probably have heard about Bella Thorne. She starred in the famous comedy-drama, Shake It Up, which was broadcasted in that channel. She has acted in several movies as well as doing music projects. The actress has even taken up on writing a fictional novel too. Now, you are probably curious to know some trivia about Bella Thorne biography and filmography.

In this passage, you will be learning Bella Thorne biography, Bella Thorne birthdate, Bella Thorne Instagram username, and Bella Thorne romantic relationship. You will find out that not only her career that is colorful. She also has an interesting personal life outside her artistic career.

Thorne was born as Annabella Avery Thorne in Pembroke Pines, Florida. Her birth date is 8 October 1997. She is of Cuban descent from her father’s side and Europe-Caucasian from her mother’s side. She has three other siblings. Thorne faced a difficult childhood. Her father passed away when she was merely ten years old due to a traffic accident. Since then, her mother had to work hard to support the family.

She revealed that she was bullied in school because of her background. Thorne’s native tongue was Spanish and she was dyslexic as a child thus the awful treatment from her peers. She eventually stopped speaking Spanish to improve her condition. Thorne also attended the learning center and working hard to be able to overcome her dyslexia. She made a surprising revelation in early 2018 that she had been sexually abused since she was young until her teenage years although she did not disclose the abuser.

Thorne started a career in the entertainment industry to support her family. She took a minor part in a movie titled Stuck on You. She then began taking roles in television series including Dirty Sexy Money and October Road. Her breakthrough came when she took on the role as CeCe Jones in Disney comedy series, Shake It Up, with Zendaya. Thorne stars in various movies too. You can see her when watching The DUFF, Keep Watching, and Midnight Sun.

This actress is also an active singer. She is releasing a full studio album titled What Do You See Now in 2018. She has also released several EPs including Jersey in 2014. Some of her singles even made it to US charts such as Call It Whatever. She releases more provocative singles such as Goat and Pussy Mine in 2018.

Thorne has been reported to have dated several figures throughout her life. She once dated Tyler Posey in 2016, although their relationship only lasted for several months. The young girl was then reported to date rapper Mod Sun. In June 2018, the news of their break up began surfacing. Thorne proudly came out as bisexual.

She is vocal about children welfare and supports organizations like Humane Society and The Nomad Organization. Thorne also supports animal rights by joining PETA. If you want to receive updates on Bella Thorne biography and filmography, head to Instagram and follow her account @bellathorne. (gk)