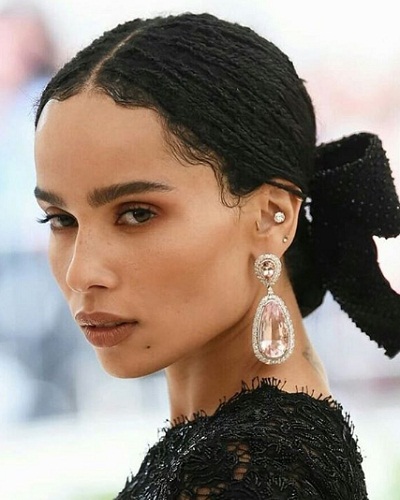 Zoe Kravitz is quite a well-known name in the film industry. Even then, some people may need to learn more about Zoe Kravitz biography and filmography because she is going to appear in many more productions in the future. Her skills are not limited in acting, she also sings and models for various pictorials. In this article, we are going to discuss Zoe Kravitz’s biography, Zoe Kravitz’s date of birth, Zoe Kravitz’s Instagram account, and Zoe Kravitz’s partner. Let’s find out more about this interesting actress!

Kravitz was born as Zoe Isabella Kravitz in Los Angeles, California on 1 December 1988. She was born into an artist family. Her father is Lenny Kravitz who is an infamous rock musician. Meanwhile, her mother is Lisa Bonnet who is an active actress. From her parents’ sides, Kravitz is of Jewish and African-American descent.

She moved around throughout her younger years. She lived in Topanga Canyon, California from five to eleven years old with her mother. After that, she relocated to Miami to get close to her father. She went to school at Miami Country Day School before moving to Rudolf Steiner School in Manhattan. She graduated high school in 2007 and then studied acting Purchase College of State University of New York. Kravitz abandoned her study and moved to Brooklyn to pursue a full-time career in films.

Let’s learn Zoe Kravitz biography and filmography/movies from the start. She debuted in a movie titled No Reservations in 2007. Since then, she took on various minor roles in movies. She started being recognized by the public after starring in X-Men: First Class (2011) as Angel Salvadore or Tempest. Since then, she garners various big projects. Her notable works including Mad Max: Fury Road and Divergent series. She is going to star in another major franchise, The Crimes of Grindelwald, which will be released in 2018.

In addition to acting, Kravitz has a list of discography and modeling deals. She started as the main vocalist of a band called Elevator Fight in 2009. The band dispersed and she started another one, Lolawolf, in 2014. The band released a digital EP but without prominent success. She also released several singles like Jimmy Franco and AYO. She becomes the face of many brands like Vera Wang and Alexis Bittar.

Kravitz dealt with eating disorders anorexia and bulimia in her high school years. She also stated that her parents’ lifestyles contributed to the condition. Her health deteriorated terribly because of that. She finally won the battle with the immense support of her parents.

Kravitz has dated several people over the course of years. She was known to have dated Michael Fassbender although the relationship only lasted for a few months. Her latest known partner is Karl Glusman who is also an actor, notably known for The Neon Demon.

The actress is known to often approach her fans by posting many updated pictures on Instagram. You can check the latest information of Zoe Kravitz biography and filmography on her official account @zoeisabellakravitz. (gk)