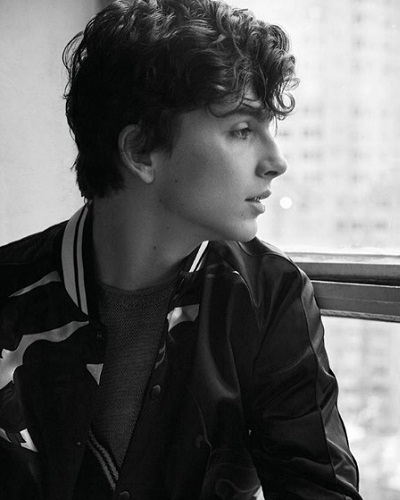 You Might Never Know Before If you ever watched Call Me by Your Name, you must remember Elio Perlman and can easily recognize Timothee Chalamet who played the role. This beautiful young man frequently appears in the theatre as he already stars in many films. You are about to know Timothee Chalamet biography and filmography you probably never know before. Here, there will be information about biography, birth date, and Instagram account including love life of Timothee Chalamet. Cannot wait to see? Here it is.

Being an American actor with many films, Timothee Hal Chalamet is recognized as a talented actor since he was very young. The guy was born on 27th December 1995 to March Chalamet and Nicole Flender. His father is French and his mother is Russian and Austrian. He seems to get acting talent from his blood because his sister, Pauline Chalamet is also an actress.

Based on Timothee Chalamet biography and movies, Chalamet came to his debut in 2014 with his first film Men, Women & Children. He played a role as a high school student. In the same year, Interstellar also became his other film with his character as Matthew McConaughey’s son. Besides, he was also noted to play some indie films in 2015 entitled The Adderall Diaries by Stephen Elliot and One and Two as Zac.

In 2017, his career was rocketing as he got a notable role as a soldier in Hostile film. Aside from that, Lady Bird (2017) also became his way to gain more fame. In the same year, another film entitled Call Me by Your Name makes him more recognized as he got a lead role as an Italian Jewish teenage who fell in love with his father’s assistant.

The last mentioned film made him received praises and compliments. The film of Luca Guadagnino led him to get significant acclaim. As result, he has been nominated for Golden Globe Award with the category of Best Actor. He was also noted to win the Best Actor of the year.

In this year, Chalamet will star Beautiful Boy drama as Nic Sheff. He is also scheduled to play a role in Woody Allen’s comedy entitled A Rainy Day in NY. Rumor has it that he will play with Selena Gomez in this comedy. Cannot wait to see his beautiful performance collaborate with talented actress and singer, Selena Gomez, can’t you?

Those who want to find out daily activities as well as updates from Timothee Chalamet, follow his Instagram account on @tchalamet. This Instagram account already has more than two millions of followers. You will get feeds and postings about his activities including personal life. However, he seemed not to be very active in sending posts and feeds for his fans.

In short, Timothee Chalamet biography and filmography already informed you much about this young American actor. With the long list of filmography, it cannot be denied that Timothee Chalamet is a skillful and naturally talented actor. Keep updated with information about his new film releases. (gk)