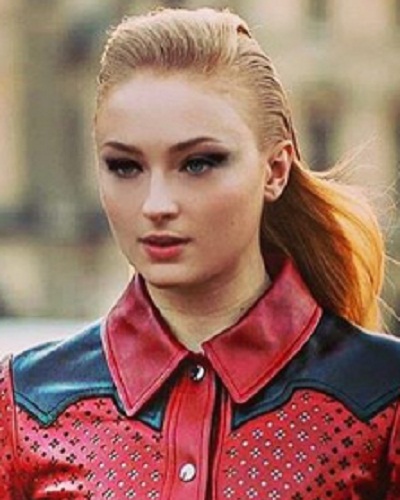 Are you a fan of the Game of Thrones series? If so, you must know about Sansa Stark, one of the main characters in this series. Do you know who the beautiful woman behind Sansa Stark is? Yes, she is Sophie Turner. This article will discuss more Sophie Turner Biography and filmography/movies. Besides her personal life and achievement, here it will also be discussed about her biography, date of birth, Instagram account, even to the partner of Sophie Turner. All are summarized in full and in detail.

Sophie Turner is an English artist born on February 21, 1996, by her parents, Andrew and Sally. She also has two older brothers, but no one knows that Sophie Turner should have twin sisters. Unfortunately, the twin died at birth.

Since the age of 3, Sophie has become a member of Playbox Theater Company, a theater training institution for children and young adults. When she was 15 years old, she was invited to play Sansa Stark in a television series called Game of Thrones. Her role was finally attached to her and helped improve Sophie Turner Biography and filmography.

She began stepping into the realm of professional acting in 2013, where she acted as the main character in Another Me. Then, she acted again in Barely Lethal with singer Hailee Steinfeld. At this point, her career continued to increase along with her popularity in Game of Thrones, until later she played a super mutant named Jean Gray in Marvel comic adaptation film X-Men: Apocalypse. In her acting here, she was finally nominated in the Favorite Squad category by the Kids Choice Awards. In 2017, she officially declares that she will resume her role as super mutant in X-Men: Dark Phoenix, where she will be an important point in the entire film.

Besides helped her hone her acting skills, Game of Throne also contributed various awards, some of which were Empire Hero Award, Best TV Actress by Glamor Awards, and also Best Supporting Actress by EWwy Award. In addition to her increasingly rocketing acting career, Sophie Turner also proved the friendliness of her heart by becoming a patron/donor in the Women for Women organization. Her main mission was to support women who were victims of war, either directly involved in the war, or left by their husbands and children.

Besides Sophie Turner Biography and movies, the love life of this young actress is also inseparable from the media spotlight. In 2016, she was found dating a member of The Jonas Brother, Joe Jonas. Finally, in late 2017, Sophie Turner officially announced her engagement to Joe Jonas via her Instagram account at @sophiet.

That's the full detail of Sophie Turner Biography and filmography. For this young British artist, acting career is still a long step to success. She keeps deep potential through her abilities. It is hoped that later she will dare to take roles in better films, so she will improve acting career even further. (gk)