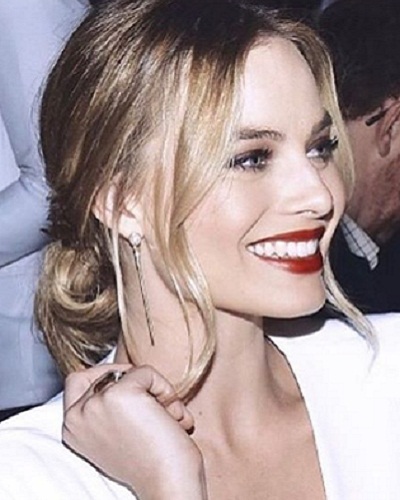 As an Australian artist, Margot Robbie is one of the most accomplished artists based on the number of films and influential roles played. One of them was "I, Tonya", which was just released in 2017. Well, this article will discuss many things about her. Besides about Margot Robbie Biography and movies, here it will also be explained about the biography, date of birth, Instagram account, even the current Margot Robbie partner. Furthermore, this article will also discuss the achievements that have been achieved by her, and her life outside of acting.


About Margot Robbie Biography and Filmography

On July 2, 1990, she was born on a farm in Queensland, Australia. Born to a mother named Sarie Kessler and father named Doug Robbie, the baby was finally named Margot Elise Robbie. But unfortunately, the marriage of her parents didn’t last long. Margot Robbie and her three brothers finally joined her mother and helped her make money by working. Because of her immense acting desire, she finally took part in a drama class at her school, Somerset College, Australia.

A year after graduation, she finally pursued an acting career by moving to Melbourne. Margot Robbie starred in various advertisements, TV series, even soap opera to perpetuate her acting career. Furthermore, she finally tried to enter Hollywood in 2011.

At first, she wanted to apply as one of Charlie's Angel's role, but because the producer was interested in her appearance, he finally offered her a role at Pan Am. This is where Margot Robbie Hollywood career has increased significantly. After starring in Pan Am for one season, she finally tried her first Hollywood film debut as supporting role in About Time with Rachel McAdams and Domhnall Gleeson.

Having a positive review, Margot Robbie was finally invited to join as the main character with Leonardo DiCaprio at Martin Scorsese's film, The Wolf of Wall Street. From there, she won a lot of praise, even the Empire Award for the Best Newcomer award.

After The Wolf of Wall Street, she then starred in Focus along with Will Smith in 2015, who later met again in, Suicide Squad. Unfortunately, a career doesn't always run smoothly for her. Suicide Squad flops, resulting in her getting a lot of criticism due to her portrayal of the famous character, Harley Quinn. However, after Suicide Squad, she then starred "I, Tonya" as the main character, Tonya Harding. Because of this film, Margot Robbie was nominated for Best Actress at the Golden Globe and Academy Awards.

Margot Robbie Biography and movies looked very insightful, where she had been proposed by famous directors like Quentin Tarantino to play in Once Upon A Time In Hollywood, and also played a controversial role, namely as Queen Elizabeth I at Mary Queen of Scots.

Moreover, Margot Robbie Biography and filmography have been very brilliant, both in the previous filmography and in the future. Now, she lives happily with her husband, Tom Ackerley, in Los Angeles. She captures her life on her Instagram (@margotrobbie) and Twitter (@MargotRobbie). (gk)