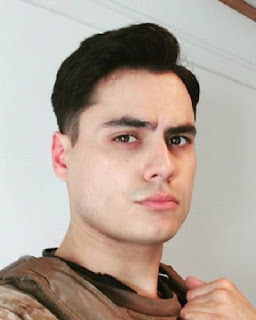 Many of may never have heard about Kiowa Gordon biography and filmography. This actor often tackles small and less known movie projects. Perhaps that is one of the reasons why he falls under the public’s radar. Nonetheless, he is a very talented young actor that people should take notice of.

Do you want to get to know him more?

The actor was born on 25 March 1990 in Berlin, Germany before his family moved back to the United States shortly after that. He comes from a pretty big family, having seven other siblings in his nuclear family. His mother, Camille Gordon, is an actress. That is where he gets his artistic talent, it seems. He is of Native American descent from his mother’s side. Because of that, he is a member of the Hualapai tribe. It is a tribe that is recognized by the federal government and based in the northern part of Arizona.

He first auditioned for a supporting role in the second Twilight movie, New Moon. The author of the Twilight novel, Stephenie Meyer, approached him personally and suggested that he tried auditioning for the role because he fit certain characters. He managed to land the role and participated until the saga’s end. Gordon stated in an interview that his success in the audition was one of the proudest moments in his life since it transformed his path entirely. He started receiving offers to act in many other movies.

Let’s talk about the actor’s acting projects in this Kiowa Gordon biography and filmography. Among his most notable movies is The Lesser Blessed in 2012 and An Act of War in 2015. The Lesser Blessed talked about identity issue experienced by Native American. It received many critical nods. For his performance, Gordon was awarded Best Supporting Actor by American Indian Film Festival. Meanwhile, An Act of War is a movie about the war veteran who is trying to navigate civil life although it proves to be a hard task. The movie was also well received by critics.

Gordon is not only talented in acting. He is also an aspiring singer. He used to be the main vocalist of a band named Touché. The band tackled progressive metal genre. However, with Gordon’s increasing activity as an actor, he had to leave the spot. He uploaded some of his musical performance on his Instagram account.

Gordon is married to his girlfriend, Kaiulani Ashley Camuso in 2012. It is known that Gordon has become a father of a young girl named Kaili. He often uploads videos of his child’s antics in his Instagram account. You can follow his official account, @kiowajgordon. He does not only post his daily activities. The actor often shares his newest projects with fans. Certainly, this Kiowa Gordon biography and filmography makes you love the actor more. Probably you cannot wait for his new movies to be released. (gk)