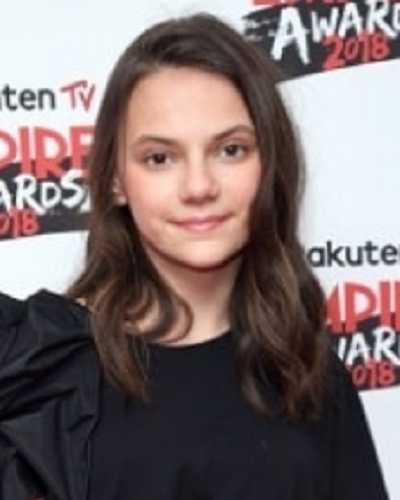 Young actress Dafne Keen biography and filmography clearly show that she is ready on taking over the world. For her movie with famous actor Hugh Jackman, Logan, she received high accolades from critics and audience. Despite her young age, she shows that she is capable to draw people’s attention to her acting performance.

She has gotten so many potentials in her that it will be fun to predict what she is going to do in the future. In here, we will discuss Dafne Keen’s biography, Dafne Keen’s date of birth, Dafne Keen’s Instagram account, and Dafne Keen’s partner.

Dafne Keen was born in 2005 as Daphne Keen Fernandez in the unspecified city of Spain. Her birth date detail has not been made known to the public yet. She holds two national citizenships, British and Spanish. She comes from a family with high involvement in the acting industry. Her father, Will Keen, is a veteran actor of small screen and theater. Meanwhile, her mother Maria Fernandez Ache is a known actress slash theater scriptwriter and director.

She first tasted acting experience when starring in a small screen series titled The Refugees. She played a character named Ani Cruz Oliver who is one of the main characters of this story. The storyline has a unique futuristic and mysterious vibe to it. In this series, she worked alongside her father as well as other experienced actors. Despite being paired with known actors, she still shone through and her performance helps her landing more projects in the future.

Discussion of Dafne Keen biography and movies will not be thorough without mentioning her life-changing part in a superhero movie, Logan, in 2017. In the movie, she played a major role as Laura who becomes Wolverine’s adopted daughter with powerful mutant ability. This movie was well-received by the audience and important critics. Some even said that this is one of the greatest superhero movies ever released.

She passed an audition for the role. The partial reason of her casting was her ability to speak in Spanish and her Latina look. Keen stated that she was often embarrassed during filming but her co-actors and director made the experience as relaxed as possible. James Mangold, the director, praised her for the performance saying that she has the capability of portraying raw emotions.

For her role as Laura, Keen received numerous nominations. Critics’ Choice Movie Award and Seattle Film Critics Society nominated her as Best Youth Performance. She won two awards in total for the movie; one of them is Best Female Newcomer from Empire Awards. You can expect to see her more in various awards as she is going to star in a new movie called Ana and where she will fill in the lead role.

There is no official news about Keen’s partner which is understandable since she is still very young. You can get the most updated information on Dafne Keen biography and filmography on her Instagram account @dafnekeen. (gk)