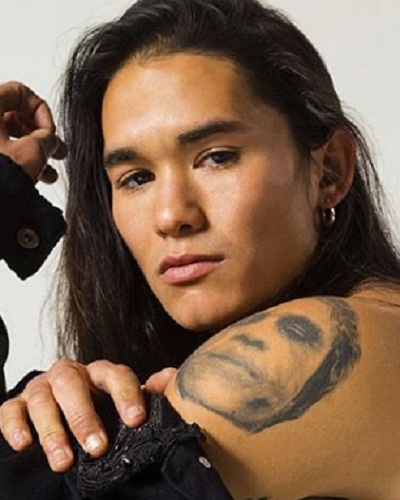 The actor was born in Beverly Hills, California on 21 January 1994. His birth name is Nils Allen Stewart, Jr. He was given the nickname Booboo because he loved to suck his two fingers as a child and making booboo face. His mother, Renee, has mixed East Asian background of Korean, Chinese, and Japanese. From his father, he is of Native American Blackfoot tribe descent. Steward has a sister named Fivel who is also a public figure.

As a child, Stewart took small roles in various movies and television series. His first big screen debut was in 2004 movie called Yard Sale. He also starred as younger Conrad sibling in the movie The Conrad Boys which explore teenage sexuality. Other than those movies, Stewart also starred in some series. He made an appearance in a popular medical drama, ER, on an episode named Man with No Name. He also participated in two episodes of Good Luck Charlie.

When talking about Booboo Stewart biography and filmography, we should discuss his career breakthrough. Public began recognizing him after he participated in the third Twilight Saga movie, Eclipse. He played Seth Clearwater who was a witty and cheerful young boy from the native wolf pack. Since then, he received more offers to act in numerous movies. He joined the cast for X-Men: Days of Future Past as Warpath. He also provided a voice for an animated movie from Marvel as Victor Kohl which is released in 2018. His most popular work is Descendants series.

Stewart is also a gifted musician. As a child, he performed in a band named Echoes of Angels. He followed his mother and grandmother to tour around. He joined a music group called T-Squad from 2006 to 2008. However, the group did not release any prominent work. Stewart eventually left to focus on his acting career.

The actor also participated in some philanthropic activities. He was appointed as an ambassador for Muscular Dystrophy Association in 2010 with the purpose to increase awareness of muscular diseases. He is also interested in child welfare, having hosted several benefit concerts for children cause. Not only that,

Stewart also pays attention to the environment. He supports PETA and some environmental organizations. Booboo Steward has dated several people throughout the years. In 2017, it was known that Stewart dated Megan Trainer who also works in the entertainment industry. However, it is unclear whether the relationship lasts until today. If you want to be updated of the actor’s newest works as well as Booboo Stewart biography and filmography updates, you can follow his Instagram account at @booboostewart.art. He does not only post things related to his daily life. He also posts many aesthetical photos. (gk)