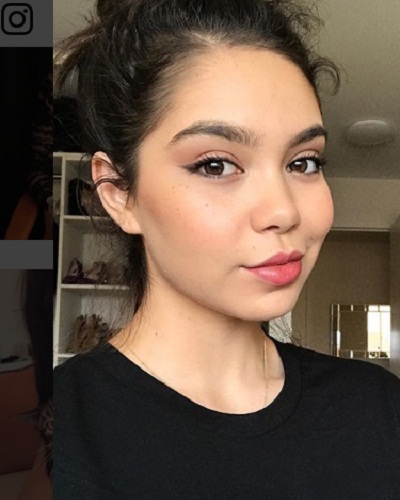 Have you ever watched Disney Moana? This film makes millions of little girls got a fever of it. The animated feature tells of a brave girl named Moana who happen to meet Chief Tui and start their adventure. If you ever wondered who behind the beautiful voice of Moana is, she is Auli’i Cravalho. Get to know Auli’i Cravalho biography and filmography to get closer to her. The American actress originated from Hawaii, not surprising she really got the feeling when dubbing Moana. Now you are about to know the biography, birthdate and Instagram account of Auli’I Cravalho.

The young American actress was born in Oahu, Hawaii on 22nd November 2000. Her name is rocketing after she got a role as Moana in a Disney film with the same name. The film released in 2016 succeeded to bring her fame. Auli’i Cravalho has Portuguese, Irish, and Hawaiian descent. The talented actress who lives with her mother loves to sing and started to join a club in her school.

She mentioned that she has a dream to be a Disney princess; however, she ever refused to join the audition for Moana. She thought that there are many talented girls out there and she was not one of them. Fortunately, an agent insisted her and finally she got the chance.

She was a freshman in her high school in Hawaii when she did it. Actually, she has to compete with hundreds of Polynesian girls for Moana character. Auli’i was the very last but she proved that she was the one who Disney was looking for. She was only a 14 years old high school girl when fortune came to her.

She got a lead role in the animated feature, Moana, being the opposite character of Dwayne Johnson. Based on Auli’i Cravalho biography and movies, Moana (2016) is her first film and there is no information related to Auli’i’s new film in short future.

Playing as Moana, Auli’i did her best so that everybody enjoys the film. She perfectly delivers the character of Moana who is brave, empowered, curious and adventurous. This is not surprising because Auli’i herself has Hawaiian blood with resemble character.

Nowadays, she becomes a part of Disney princesses and she has to be ready for the risk of being famous. Her Instagram account @auliicravalho is flooded by followers, as results, she gets more than 600K followers. You can check out her daily activities through her Instagram account. She is quite active on Instagram that enables you to get a feed from her.

From Auli’i Cravalho biography and filmography, now you know that she is a newcomer in film, yet she has the talent to improve herself and keep up with her good work in acting. There is no much information about her personal life including love life. Just hope that there will be other films involving Auli’i Cravalho because many people cannot wait to see her in the action. (gk)